In our 19 years in business (since 1996) and test firing thousands of bullets we know bullet performance.  It is ever changing though. At ARIZONA AMMUNITION, LLC.® we do not use the current ‘popular’ bullets just because they are the latest rage.  O we test them to keep up on progress and new ideas but, it has to be functional in every aspect.  We use the ballistic gel test, Ohler 43 and Ohler 35P chronograph test and the actual field test of live targets. While the ballistic coefficient (BC) is important it is not everything.  Always know that the published BC is by the manufacturer and they set their own BC by a mathematical calculations.  It is an accepted industry procedure.  There

are some companies that actually have a “marketing” BC. A BC that helps sell bullets. Know that the BC listed for a bullet is relative to a certain distance, usually  about 100 yards.  As the bullet travels and slows the BC changes…basically it gets worse.  All know that do  the calculations on the bullets BC is that the faster the bullet travels the BETTER THE BC.  Even a bullet with a less that good BC benefits from higher speed.  And a bullet with a great BC benefits by getting and even better BC at higher speeds and longer distances. That is an absolute fact.

A common mistake by shooters today is the selection of a bullet that does not fit the application.  Shooters too often focus only on the BC. The bullet  might shoot good but, it maybe the wrong application. Many manufacturers provided recommended applications for their bullet and are generally very spot on.  They have data on the effective application, effective speed, and some even list the recommended barrel twist.  Of course ARIZONA AMMUNITION, LLC.® is known for its higher speed ammunition thus improving the BC as the bullet travels. The application of the bullet very often changes with the high speed becasue the bullet performance changes.

As stasted bullet manufactures often list a recommended speed for the best performance.  We accept and respect that but, we have found in 98% of

the cases where we greatly increase speed the bullet it can have improved performance. We often discuss our  findings with the manufacturer.  Most shake their head (while they smile) at our results.  Our opinion shown here is on bullets that we push to the limit. Therefore other ammunition and bullet manufactures may have legitimate results that differ from ours at slower speeds. Compare their data with ours carefully.

Not all bullets are created the same.  Again each has a specific purpose as designed by the manufacturer.  There is no such thing as a bullet that does everything either.  Anyone claiming such is a fool and separated from the truth and reality!.  We test and test and test bullets in all types of applications.  Remember that we are all about accuracy, high speed, and top performance as one unit. Our friend John Lazzeroni (BELOW) and Lazzeroni Arms (custom rifles)  once wrote a great article that spoke of what is the value of a top performing bullet if it is not accurate?  If you can not hit what you are shooting at it does not matter how great the bullet performs when it hits (if it ever hits??).

We agree fully with John.  We get customers on a regular basis that read about how a bullet expands perfectly in a water or a gelatin test and generally little is said about the accuracy of that same bullet.   Again some bullet manufacturers list recommended speeds for their bullets for best performance in expansion.  Others list recommended seating depths and several list exactly what game the bullet is intended for.  It is curios to us that some shooters use ‘target’ bullets that shoot well in their rifles as a hunting bullet!  We will never do that, even if you ask us too.

We at Arizona Ammunition, LLC.® feel that each hunter  has a moral obligation to the game he/she seeks to use the best performing bullet possible that is intended for that type of game. The ammunition is to be as humane as possible based on experience and field testing too. 100% of the States have ban tracers, full metal jacket, and armor piercing bullets for hunting application and they should be ban.

Knowing our belief, please do not ask us to do something we will have to tell you NO on. We once took some heat from shooters and organizations because when asked if we make armor piercing ammunition when we responded that we do not because it has no “sporting” applications.  When asked why the quick “no” answer it was easy because we strongly feel “there is no sporting applications for armor piercing bullets” in target shooting or hunting and in most cases illegal. Again the facts are that most public shooting ranges do not allow  full metal jacket,  armor piercing, tracers, or similar bullets to be fired on their ranges either. We will work with bullets that make sense and have an application in the areas we work in. Hunting and target shooting.

We use bullets from around the world. We study the animal, body weight, vials locations, overall size, stamina, how dangerous, and more.  We talk and listen to our hunters on their experiences with various bullets too.  We talk to the bullet manufacturers about what they intended the bullet for.  One variation is of course our speed which changes the performance of the bullet and we monitor and study that all the time.  Many bullets perform very different at our higher speeds.  Generally much better.

As you look at our information here on our site and you do not see a favored bullet ask us about it.  There are several  reasons that we might not offer a specific bullet.  One might be that  we

Jim and Dr, Ken Oehler (in the middle) Ken is considered one of the top ballistic’s guy’s in the world!

do not approved of them, that they do not perform as the manufacturer claims or meet our performance requirements.  Another might be that they do not meet our accuracy requirements,  Or that we simply have not tested them yet. Finally, they may no longer be available.  Ask us! We will never use a bullet just because it is the latest “BUZZ” by the gun writers.  It must actually work!

There is a sudden rage about Ballistics Coefficients (B.C.).  Every other inquiry we get is about the B.C. of the planned bullet we are going to use.  1,000 yard long range and benchrest shooters have long been aware of the application of B.C.  This is not new. In the 6PPC game they shoot up 300 yards.  Now this is the most serious group of shooters on the planet too.  They absolutely know that B.C. really means nothing until AFTER 300 yards. That is when the VLD’s and other high B.C. bullets really start to perform. We also know that bullet with less than 600 do not benefit from G7 calculations either.There is much confusion about all this too. 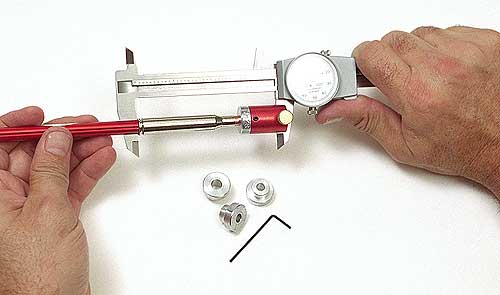 Another point is that bullet manufacturers assign their own B.C. to each bullet. Their is no company, board, government agency, or industry oversight about the B.C. assignments. All of us have to trust the manufacturers that they properly and fairly assigned the B.C. Another point is that most shooters do not realize that the B.C. of a bullet changes as it travels down range.  The B.C. of the bullet changes based on the speed it travels and then as it slows.  An absolute fact that the faster the bullet flies the better the B.C. So the longer it flies fast the better the good is B.C. sustained.

Added to all this is now whether one uses G1 or G7 (G7 only has value over 600 yards generally otherwise use G1) in figuring the B.C. effects on the bullet!  Confused…we get that way too.  Nothing replaces actually shooting the bullet and recording the results.  But, we do believe in the math part too.  But they both must make sense! Our ballistic’s program can figure G1, G2, G3,G4, G5, G6, G7, G8, G9 or what ever you want.

Now there is the Meplat or the sharpness of the point on the bullet.  We have a Melpat adjuster here and we use it from time to time.  BUT, scientific studies using Doppler Radar has clearly shown that you can over adjust the Meplat and cause the bullet to be less accurate!  Famed gunsmith Dave Tooley recently experienced that in some testing with Accuracy International and Walt Berger has been telling us that for quite some time.  If the Meplat is to be adjusted then the adjuster must know what he or she is doing and if it is even necessary.  Part of this all means that the bullet point can be too sharp! A consistent Meplat is generally the goal.

When you as the shooter, become concerned about the B.C. or Meplat think of the last 5 years of your shooting and remember the ranges you shot.  Most game in the United States is shot at under 300 yards.  the B.C. does not matter! Most shooters practice, test, or sight in under 300 yards and again  B.C. does not matter.  We recommend that you concern yourself with what does matter, a well placed shot with the correct caliber applications.  Use great optics, know how to use the features, use a quality firearm, and know how to use it, and use the ammunition that has the correct speed, accuracy, and bullet for the application. That and Practice, Practice, Practice will make the difference more than B.C. and the Meplat!

Finally we look at other factors that do make a difference in bullet performance like the consistency of the Ojave location on the bullet.  Some manufacturers can not get the Ojave in the exact same location on their bullet.  This directly and greatly effects the performance of their bullet.  We have a Vern Juenke bullet run out testing machine and some manufacturers can not make a bullet with true and consistent run out from bullet to bullet.  This again directly and great effects the performance of the bullet.

Do Not focus solely on the B.C. or that it says “long range” on the box.  Study it, read about, it and call us for our opinion before settling on a specific bullet. Do not let the marketing or a gun writer decided for you!

Jim and the famous Dave Tooley