At Arizona Ammunition, LLC.® SPEED is our middle name after ACCURACY!  Not everyone agrees with this of course but we strongly feel and our experience shows that Speed kills.  That

Speed can make the difference on a hit or not!  With additional Speed over the standard factory cartridge the amount of drop in the bullet reduces at closer  distances.  The more you can “point and shoot” quickly instead of taking the time to figuring drop on your cellular telephone, on your drop chart, or with ballistics turrets the better your chances of a solid hit improve with increased Speed. We would never say a range finder is not needed or an understanding of the ballistic turrerts or drop charts is still valuable.  We are firm in saying that the shooter should not count on any one of them 100%.  Have options and know how to use them. We once helped Olympic Shooter Bob Foth (now an Olympic Shooting Coach) win the World Championships and qualify for the Olympics, with two custom rifles shooting our custom 6BR ammunition made just for Bob and each rifle and Berger Bullets.  We provided this very custom ammunition for Bob a total of 6,000 rounds, of which he practiced with 80% of them before the Championships.  The 6BR, with the 107 Berger bullet, was traveling some 150 feet per second faster than standard 6BR ammunition.

What Bob experienced was that he did not have to allow for the wind drift or the distance as much as his fellow competitors with our faster shooting custom ammunition.  He was able to nearly shoot directly at the target though out the competition and thus had much higher scores and won by a large margin too!  At one point a competing team telephoned us and asked us to rush several thousand rounds to them during the competition because Bob was beating all other competitors severely.  Of course Berger and us declined and smiled.  Bob won it all and speed helped him make a difference.

Floyd Green (owner of the OUTDOORSMANS), Julius Fortuna, and others changed the hunting world when they created the greatly improved Weatherby 30-378 Wby. Mag. rifle and using a 150 grain custom Barnes Bullet and dramatically higher speed custom ammunition. Partnering with McBros Rifles (Rock McMillan) they used a Custom McMillan bolt action rifle. Arizona Ammunition, LLC.® developed the high speed ammunition for the new custom rifle and was able to achieve close to 4,000 feet per second consistently with the custom 150 grain Barnes bullet!  The results?  A hard hitting and lighter recoil 150 grain Barnes bullet with such improved energy that it would take down a 900 pound Elk with ease.

Arizona Ammunition, LLC.® has experienced these same results in many other calibers by increasing the speed.  But, it takes aquality bullet to be successful. Hunting bullets like Nosler, Barnes, Hornady, and Woodleigh benefit from the higher speeds.  Others may  not.

While shooting problem animals for the United States Department of

Agriculture (USDA)/WildlifeServices, Jim of Arizona Ammunition, LLC.® and Duncan Davis (McMillan Machine) experienced first hand the results on hundreds of large and smaller animals.  At 4,000 feet per second from their 243 Winchester custom ammunition with 55 grain Nosler Ballistic Tip bullets they saw animals struck at as close as 9 feet with no exit wounds (not a mark on them) and “point and shoot” success at 400 yards!  150 to 225 pound deer shot and killed with one shot time after time  with the light high speed 55 grain Nosler Ballistic Tip. They all went down…no chasing a wounded animal, with one shot!. Over 10 years of testing on hundreds of live targets showed indisputable results of what speed can and will do.  No mistake!

So our focus here at Arizona Ammunition, LLC.® is EXTREME ACCURACY AND HIGH SPEED together.  A real challenge too!  Nearly all rifles will achieve these results BUT not all of them! 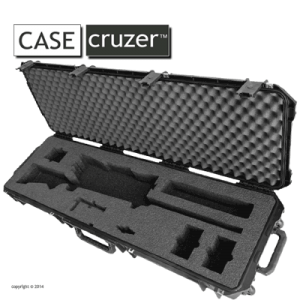